Menu
Lightroom Classic Tutorials > Organizing Photos > Keywords > What kind of keywords should I assign to my photos?

In previous weeks, we’ve discussed the benefits of keeping all of the photos in a single catalog and using Lightroom’s tools to organize them. For the next four posts in the series, we’re exploring keywords. Keyword tags are text metadata used to describe the content of the photo. Unlike collections, keywords can be stored in the metadata of the files and understood by a wide range of software, so your efforts are not wasted, even if you later move to other software.

Image recognition software is already able to identify many subjects, reducing the need for keywords. If you’re a CC subscriber, you can try it today with your own photos using Lightroom Web, or the Excire plug-in adds similar functionality to Lightroom Desktop. However, it’s likely to be some time before software can correctly name your friends and family, or tell the difference between a lesser spotted and great spotted woodpecker, so some keywords are still important.

What kind of keywords would you use to describe your photos?

If you’ve never keyworded photos before, you may be wondering where to start. There are no hard and fast rules for keywording (unless you’re shooting for Stock Photography). Assuming you’re shooting primarily for yourself, the main rule is simple—use keywords that will help you find the photos again later!

For example, they can include: 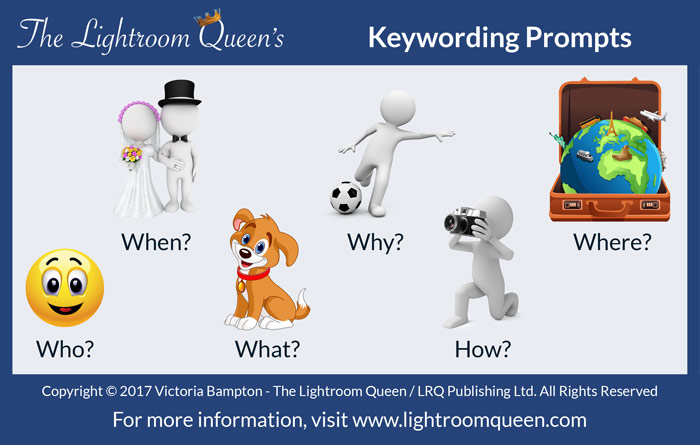 Before you start applying keywords to photos, think about the kinds of words you would use to search for your photos.

The importance of consistency

While you’re planning the kind of keywords you’ll use, also think about consistency within your keyword list, otherwise you’ll spend a lot of time tidying up your keyword list later. For example:

Need some ideas? While controlled vocabularies are overkill for most amateur photographers, they can be a great place to get ideas for your own keywords and list structure. Here’s a list of some popular keyword lists, both free and paid.

In the next post in the series, we’ll consider the advantages and disadvantages of flat and hierarchical keyword lists, and then we’ll put the theory into practice in the following posts.