This post was originally written in 2009, and a lot has changed since then, so you’ll want to check out my new series of 8 posts on improving Lightroom’s performance.

[Warning – this is quite long. I had originally intended to split it over a number of blog posts, but it’ll be easier to reference as one post.]

Who has never said “hurry up Lightroom”?  Speed is one of the most popular feature requests from Lightroom users everywhere, and no doubt the engineers will continue working on Lightroom’s performance over time, but for now, there are plenty of things you can do yourself.  Some are obvious, some not so…

Speed Tips in Library module
There’s a big difference between rendering previews that have never been built or that need updating, and loading those ready-built previews from disc.  How can you tell the difference?  The overlay in Loupe view will tell you exactly what it’s doing – and therefore what you can do to help.

“Rendering Preview…” means it’s rendering a preview for the first time – and you’re having to wait for it!  You could set Lightroom rendering the previews when it imports, by selecting your chosen preview size in the import dialog – it’ll slow you down initially but once it finishes rendering, it’ll be much quicker.  For files that are already in your catalog, select them all in Grid view and go to Library menu > Previews > Render Standard Previews or Render 1:1 Previews, and go off and leave it until it’s finished.  It’ll skip any that already have current previews, and you’ll find browsing much quicker when it’s finished.

So what size previews should you render?  If you want to quickly zoom into 1:1 view in the Library module (not Develop), then it’s a no-brainer – render 1:1 previews rather than Standard-Sized previews, either in the Import dialog or using the menu command noted above.  On the other hand, if you rarely zoom in Library module, you’re better off using Standard-Sized previews, as they’ll take up less disc space and be quicker to read from the cache.

If you see the “Rendering: Higher Quality…” overlay, it means the existing preview is too small or too low quality.   If you’re seeing that overlay in Fit or Fill view, you’ll want to reconsider your Standard preview size.  You’ll find those settings in the Catalog Settings dialog under the Edit menu (Windows) / Lightroom menu (Mac).  Generally speaking the Medium quality setting is fine, but you may decide to increase the Standard preview size from 1440 to a larger size if you have a high resolution screen and regularly see the “Rendering: Higher Quality…” overlay.

“Rendering: File Changed…” means, well, that’s the file’s changed since the preview was created.  That could mean that you’ve made changes in the Develop module, using the Quick Develop panel, or by applying a preset.  Using the Render Standard Preview menu command to update those previews while you do something else will speed up your browsing.

“Loading from Previews…” is the overlay you’re aiming for – that means your existing preview is being loaded from the preview cache, which is the quickest option.

First, you need to understand the difference between Library module and Develop module.  Library shows you lower quality previews from the previews cache.  Develop, on the other hand, assumes you need an accurate view, so it first shows you the preview from the preview cache, then does a quick read of the raw file, frees up the sliders for you to start working, and then finishes loading properly, before it turns off the “Loading…” overlay.  You don’t have to wait for the overlay to disappear before starting work on the image – and if you find it distracting, you can turn it off in the View menu > View Options > Loupe panel > ‘Show message when loading or rendering photos’.

That’s all well and good, but that’s still a lot of raw data to load and process each time you switch images.  Have you ever noticed, though, that when you adjust a file in Develop, move to another image, and then come back to that first image again, it loads much quicker than it did the first time?  That’s where the Camera Raw cache, also known as the ACR cache, comes in.  When Lightroom reads the data the first time, it adds it into the shared Camera Raw cache.  When you load that image into Develop module, where possible, it will load that cached data, which is much quicker than reading and processing the original raw file data.

By default, that Camera Raw cache is only 1gb in size, and when new data gets added, the oldest data is removed.  With only 1gb of space, that happens quite quickly, so you’re not seeing the benefit.  If you go to Lightroom’s Preferences dialog, and look in the File Handling tab, you can change the cache size to suit – up to a maximum of 50gb.  Bigger is better!  You can also change the location if you wish to – but make sure it’s on a fast hard drive. 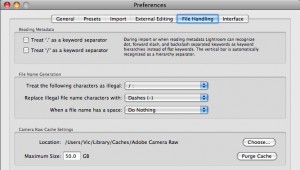 Once that data is cached, it’s much faster moving between images in the Develop modules – almost instantaneous on high end machines.  Of course, that is only helpful when Lightroom has recently read the raw file, and added it to the cache – and there isn’t currently a menu command to pre-load the Camera Raw cache.  All is not lost!

There’s a trick to pre-loading the Camera Raw cache – in addition to actually viewing the image in Develop module, there’s another obvious time when Lightroom has to read (and therefore caches) the raw data – namely, when rendering previews.  If you haven’t already rendered previews for your files, simply using the Library menu > Render Standard-Sized Previews command will do the trick.  If, however, you already have current previews, you can force them to re-render by making a minor or reversible change to the images (i.e. by using a Quick Develop button) and then using the Render Standard-Sized Previews menu command.  Leave it to finish, and by the time you come back, even the Develop module should be moving through the images at a much more comfortable speed.

It’s true that large catalogs can be a little slower than small catalogs – but we are talking BIG catalogs.  It’s not generally a good reason (any more) to split your library into 300 different catalogs – that just defeats the object of having a DAM system like Lightroom.

If you find Lightroom is feeling a little sluggish, find the Catalog Settings dialog under the Edit menu (Windows) / Lightroom menu (Mac), and press the “Relaunch and Optimize” button to perform database optimization.  It’s worth doing regularly, and any time you make significant database changes like importing or removing large numbers of files. 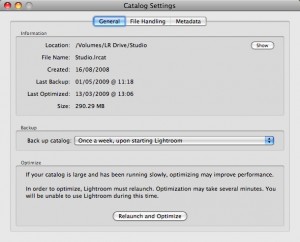 Finally, Hardware Tips & OS Tweaks
There is no question, Lightroom loves good hardware, but it can still run nicely on older systems too.  Do make sure you’re running the latest Lightroom release (currently 2.3) as performance improvements have been made to each release.

The system requirements are listed as Intel Pentium 4 or equivalent (i.e. a processor with the SSE2 instruction set or later), with 1gb of RAM and 1gb of hard drive space.   Now let’s be clear – those are minimum system requirements.  It’ll run – well, it’ll walk!  But if you start trying to feed 5d Mk2 files into Lightroom with a computer that was in the Ark, don’t expect it to be fast, and don’t complain about the speed.  If you’re going to spend money on the latest and greatest cameras, bear in mind that your computer hardware may also require a helping hand with those new super-size files.  Yes, even those sRAW files.  😉

If you’re working with existing hardware on Windows, check your graphics card.  You don’t need a heavy-duty graphics card to run Lightroom, but you will benefit from the latest drivers that are available from the graphics card manufacturers.  If you haven’t checked recently, that’s your first port of call for a free and easy performance fix.

Next, if you have an nVidia graphics card (Windows again), a quick Google will bring up numerous pages of tweaks which can make a massive difference to Lightroom’s speed, particularly for sticky sliders, slow preview refreshes, and Adjustment Brush problems.  Most notably, disable the nView software which is installed along with nVidia drivers, as there are known conflicts.  Other nVidia tips can be found on these posts:

Hard drives are another obvious place to look.  For a start, you’ll want plenty of space on your hard drives, particularly the boot drive, as your computer will get slower as you start to run out of space.  If you’re on Windows, defragment your hard drives regularly too.

Hard drive connections can also slow down Lightroom, due to the amount of data transfer when working with large files.  Internal drives will usually be quickest.  If you have to work from external drives, eSata and Firewire800 will be much quicker than Firewire400 or USB.  Ideally your catalog (and the previews alongside) will be on a different physical drive to the image files themselves (just another partition of the same drive won’t help).

If you’re looking for new hardware, you may be wondering if Lightroom can make use of multiple cores – and yes it certainly does.  I’ve seen it use up to 650% of my 8-core machine when running processor intensive tasks such as multiple exports or rendering previews.

Lightroom also loves plenty of RAM, but bear in mind that you’ll need a 64-bit operating system to really take advantage of large amounts of RAM.  If you have more than 4gb of RAM, you’re most likely to see improvement in the responsiveness of Develop module by using the 64-bit version.

And finally, a little logic.  Virus protection constantly scanning the same files that Lightroom’s trying to use will slow you down.  Consider excluding the catalog (*.lrcat), the previews file (*.lrdata next to the catalog), and the ACR Cache (check the Lightroom Preferences dialog for the location) from the live scan, and perhaps the images themselves.

The less junk you have running in the background, the better, particularly on older slower machines.  That includes those fancy little system tray programs that load on startup.

That’s all for now – if you have any favorite speed tips, feel free to drop them in the comments below!