In the last post, we were talking about the kind of keywords to add to your photos, but this week, let’s talk about the pros and cons of flat vs. hierarchical keyword lists.

On the left, we have a single long flat list of keywords, and on the right, a hierarchy of keywords nested inside other keywords. So which should you choose? 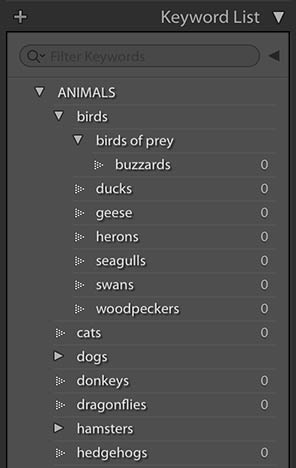 There are a number of factors that might influence your decision. They include:

There is, of course, a compromise. You could have a very simple hierarchy, with a few parent keywords and all of the other keywords nested directly inside, for example, your parent keywords might be who, what, where, when, why, how. These can also act as a prompt, to remind you to add at least one keyword for each. You can even create a smart collection to show photos that don’t have at least one keyword under each heading.

If you decide on a hierarchical keyword list, draft your list in a text editor or spreadsheet, or even on a piece of paper. By doing so, you’ll save yourself a lot of time rearranging your keyword list later. One more tip… when adding People keywords, don’t try to create a family tree. Since most of us have more than one parent, it gets messy fast!

In the next post, we’ll start on the practicalities – how to create keywords, apply them to your photos and most importantly, how to use them to find the photos again later.