Last night, I was downloading/moving from my SD Card to my Toshiba External Harddrive a session (Copy and Converting to DNG)
My files had all copied and were in the middle of converting to DNG when my hard drive accidentally got knocked off the table by my kid and was unplugged!
I got an error that 600 and something files failed to convert, but I saw they were all in the library (some .dng some .cr2) but they had the little film icon with the ? symbol. In fact the entire hard drive library did. So, I took one of my main folders, right clicked and chose the option where you can tell it where to look. Selected the folder in my HD to open. I noticed it made a new header category/location for the same Toshiba HD with the file hierarchy listed under it. But only have of the photos were showing up, and in the old hierarchy listing of the Toshiba HD, those folders were gone. I wish I would have taken screen shots. anyways, I went to show those folder that didn't show anything where to look and it appears they are missing on my External Harddrive.
I ejected the hard drive and removed it and restarted.
Then, I got the Error 16.
But at the same time, the safari browser started acting up: certificate errors on every single page, pages loading crazy, app store wouldn't connect.
Resolved that issue by doing the following : from troubleshooting that online, I found that it could be my system time was messed up. and it was! It was off by a couple hours and said it was like April 2037. It even was set to go by apple settings. So I reselected apple configuration and Voila - Safari and App store are back to normal. I know this has to be related to something damaged in my lightroom.
Also, the main reason I make sure to refer to my external hard drive as Toshiba: when the update for Sierra came out, it looked like all my files had disappeared. I had to download Tuxera Disk Manager in order to resolve that issue (that I believe was widespread with the update)
Any help would be so greatly appreciated.
I have not attempted to uninstall and reinstall lightroom, mainly because I am worried that my folders are somehow hidden in my hard drive and if I change settings in lightroom I won't find them again, lol. I know they have to be on there. I am praying they are. I am hoping it is something to do with the Lightroom/Toshiba/Tuxera combo along with whatever the heck happened to my time settings. THANK YOU!!!!!! <3
Sort by date Sort by votes

Ok - so after posting, I realized I hadn't restarted AFTER fixing the time issue - I restarted the mac and the Error 16 seems to be gone (?!?!) crazy, now even my last download/move opens. However, most of the folders are still showing lost/ ? marks - even tho the individual photos aren't! I was able to take some screen shots - posting in one sec
Upvote 0 Downvote 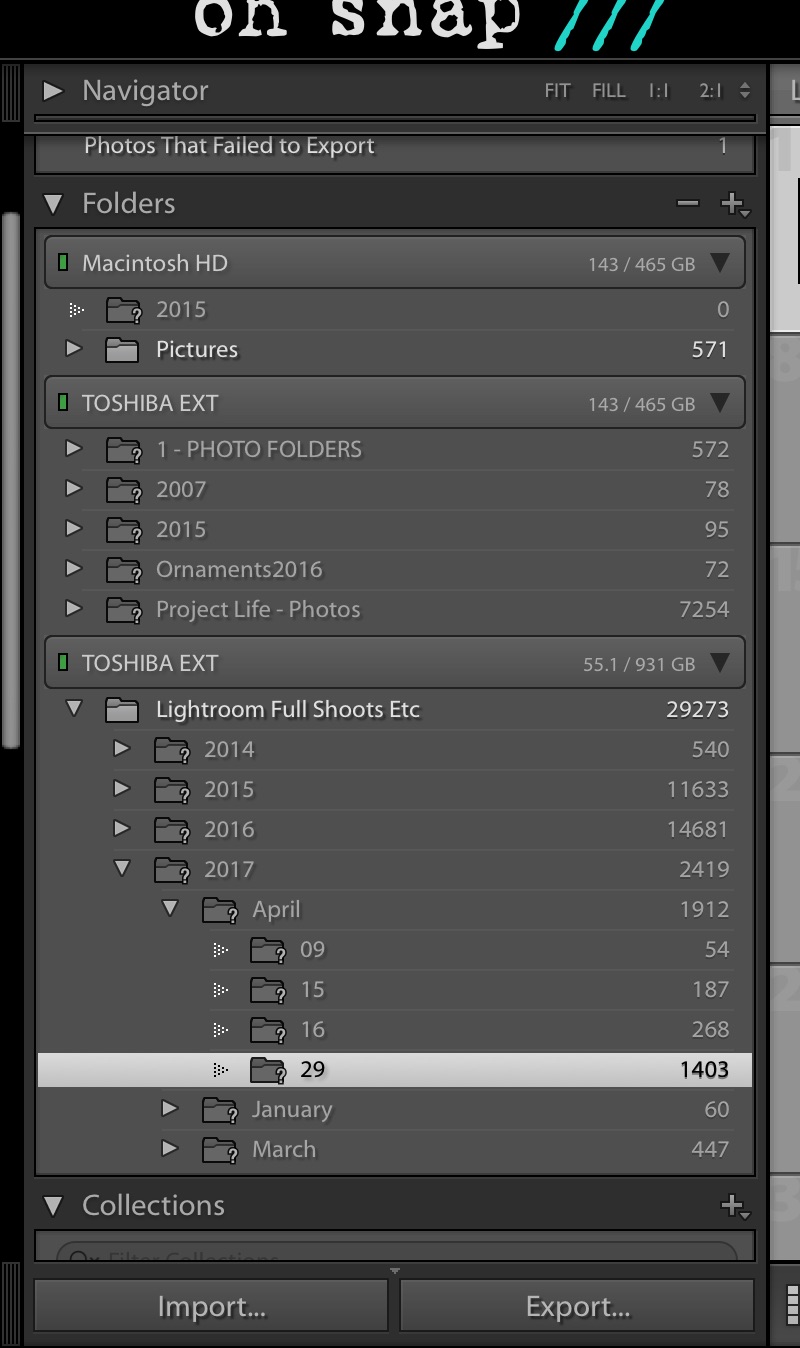 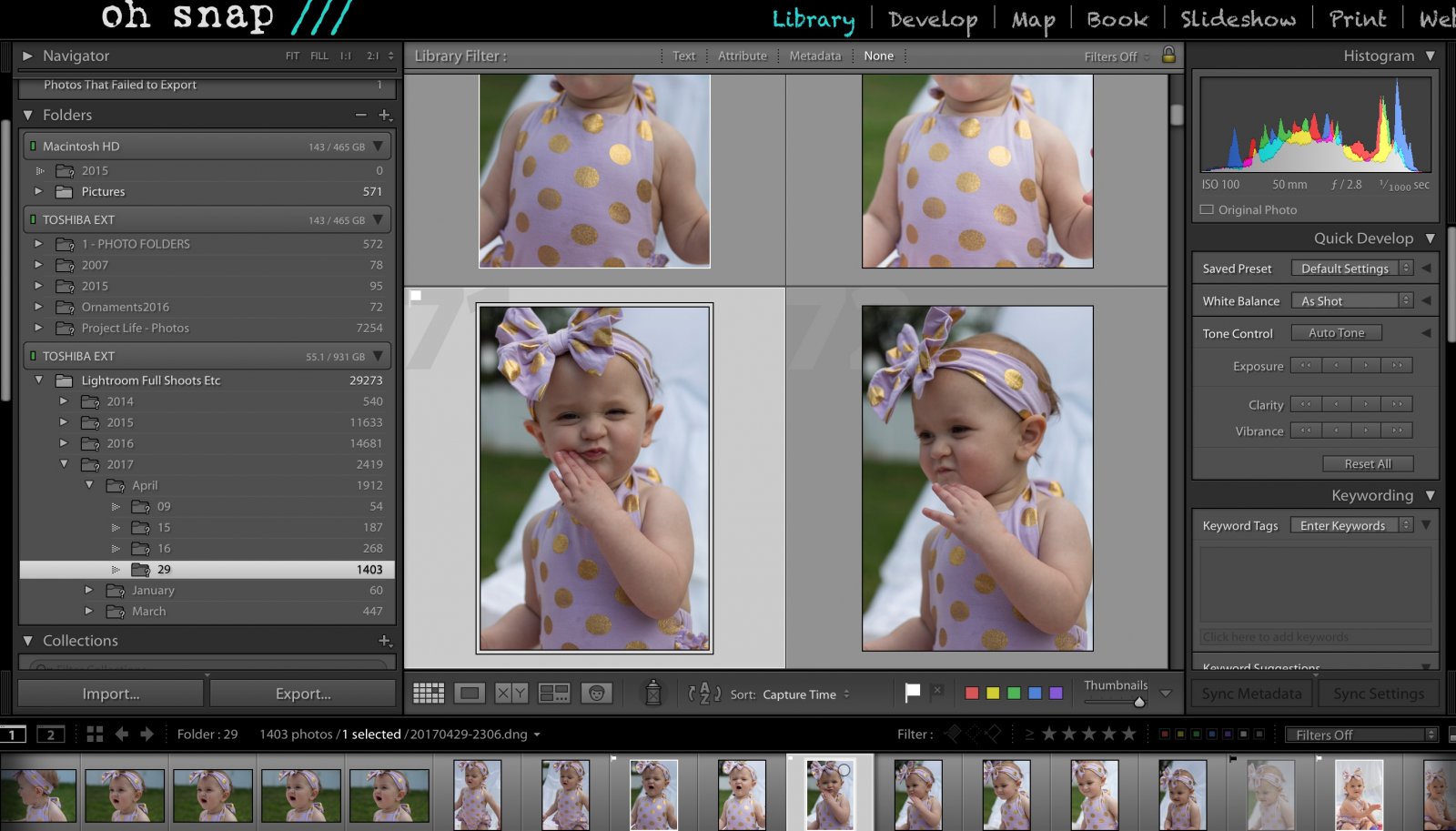 clee01l said:
These are most likely two instance of the same volume showing in the Folder panel
Click to expand...

I note the sizes are different... could there be more than one?
Victoria 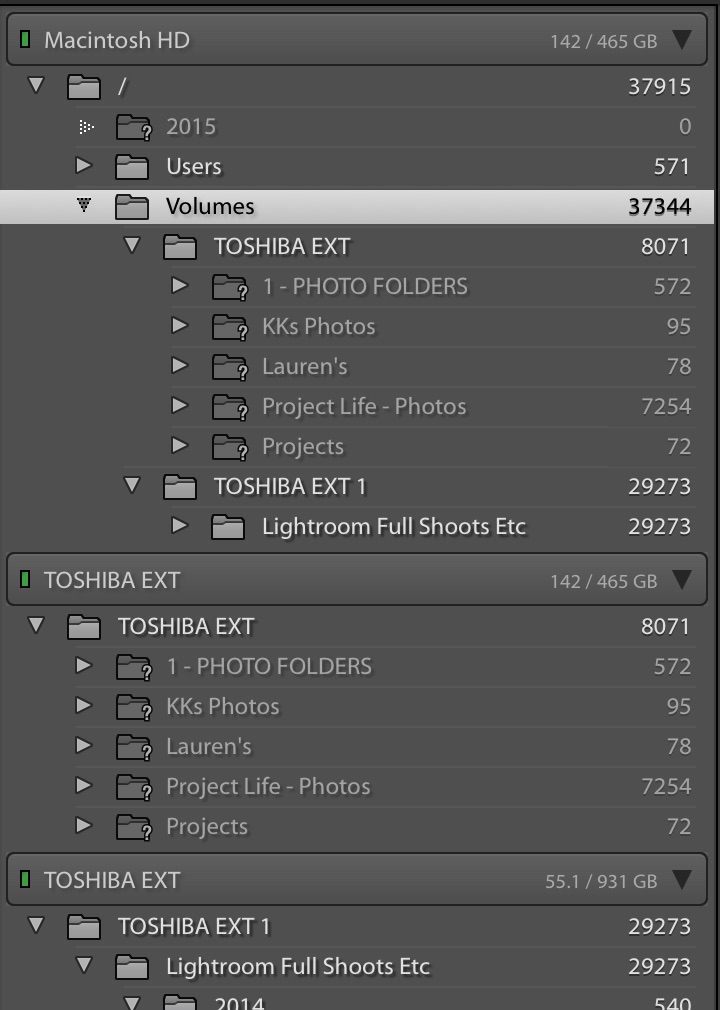 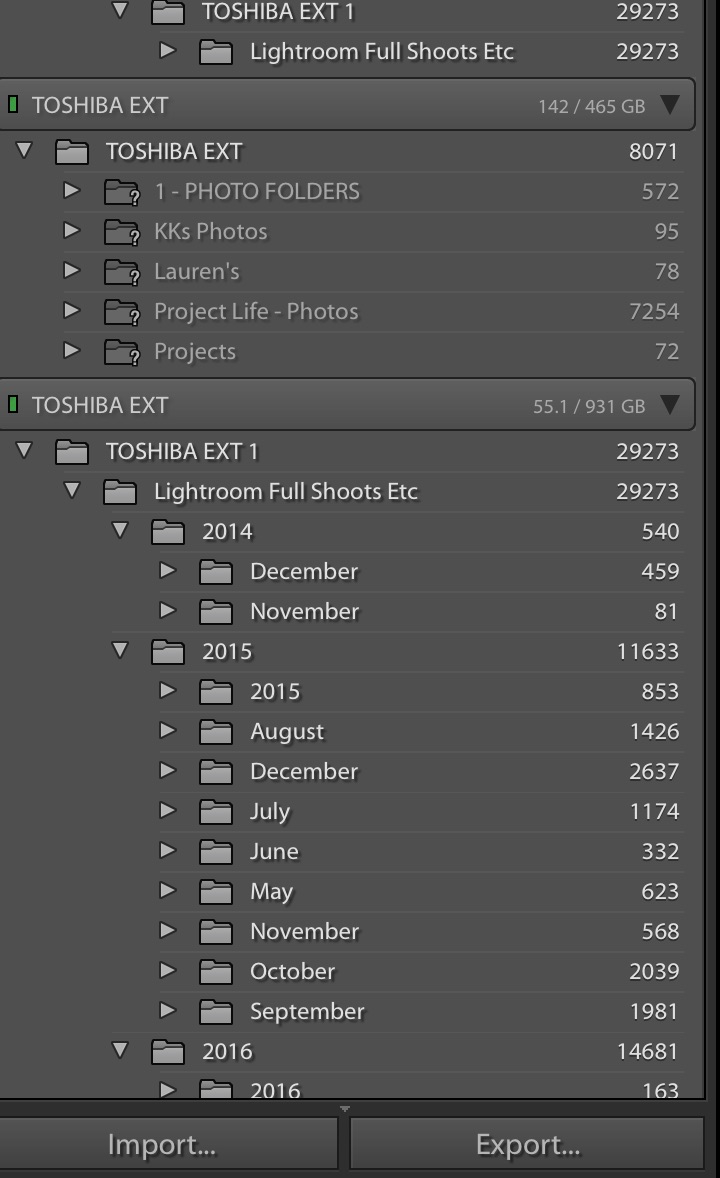 So, when I did the show parent folder thing, it seemed to find all my images on that new Toshiba listing that was created. the old listing (my original) wouldn't allow the option for any parent folders to be shown.
I expanded the Mac Internal Harddrive, I asked it to show parent for the 2015 folder, it said there were no images (not true, but it was doing the same thing for my Toshiba drive) Do you think I should point it in the direction of the toshiba files, and it would them have them appear in the new Toshiba listing it made?
Upvote 0 Downvote

Let's not do anything until we sort it all out and I have a clear understanding of your filesystem.
What I am seeing now is that you have two different external drive mounted on your Mac One is named "TOSHIBA EXT" and The Other is named "TOSHIBA EXT 1". Are these the same volume or do you have two EHDs with slightly different names? Now it is more important than when I asked before for a screen shot of your Finder window showing these same folders.

Lightroom thinks that you have a missing folder named "2015" as a sub folder in the unlikely place of the root folder "/" of "Macintosh HD". Is this suppose to be where it is? or did it get there and then was moved by Finder?
-- Cletus D. Lee --

These are the same hard drive, last night when the "?" symbol appeared, I "showed" LR where to look for the folder and it made this second listing of the Toshiba EXT (and named it with a 1 at the end) No idea why it shows different sizes of the drives.
there is a folder named "2015" on my mac directly, only because it was placed there by mistake when I first got it (switched from PC and forgot to make sure my import settings were the way I want them)
Upvote 0 Downvote

Did I need to go up higher for parent folder listing? I think I got excited when it showed me that it "knew" where my images where.. and didn't go any further
Upvote 0 Downvote

I really need to see a screen shot of your Finder windows showing these same folders and volumes.
-- Cletus D. Lee --

MacOS stores information about a disk internally as a unique identifier. The disk name is just to make things easier for the user. Somehow MacOS considers your disk as a different disk than before; the difference in size that Lightroom shows indicates that something may have happened in the formatting. So right now the current disk is 'EXT 1' and the other one is missing as far as MacOS and Lightroom are concerned. So my suggestion is to treat this as any other situation where image folders were moved to a different disk: reconnect them.
Website: Johan W. Elzenga
Facebook page: Johan W. Elzenga, photographer

JohanElzenga said:
and the other one is missing as far as MacOS and Lightroom are concerned.
Click to expand...

The screen shot of the Folder panel indicates that both are mounted (green icon) and visible in LR as "Toshiba EXT"
-- Cletus D. Lee --

clee01l said:
The screen shot of the Folder panel indicates that both are mounted (green icon) and visible in LR as "Toshiba EXT"
Click to expand...

OK, so the disk is not officially missing. But the content is and as it concerns the same disk, my advice still stands. Treat this disk as missing, reconnect all the folders on it and the problem should be solved (and the disk should disappear from the folder panel). As always, make a catalog backup first.
Website: Johan W. Elzenga
Facebook page: Johan W. Elzenga, photographer

To elaborate a little: I've seen a similar problem some time ago with my wife's Mac. On her computer there was only one user with her name, but when connected to by another computer on the network it showed 'MyWife' and 'MyWife 1' as two users. I had to use 'MyWife 1' or a file I copied to her computer over the network would not show. I never found out exactly what was going on, but it must have something to do with sharepoints. It was harmless enough, I just needed to remember to use 'MyWife 1'.
Website: Johan W. Elzenga
Facebook page: Johan W. Elzenga, photographer