I am trying to update but in the CC apps area LR says "up to date" and in LR under "help" System info" the version is: CC 2015 [1014445]. I've just purchased a Canon 5D IV. My Camera Raw CC is up to date and I can convert CR files to DNG and import into LR but would rather work more smoothly directly in LR. I looked for a thread on this and probably overlooked the solution. Thank you for your time and expertise!

Hi, welcome to the forum.

That version is the base 2015.0 version, the current level is 2015.10.1. You can try signing out of the CC desktop app, then sign back in again, click on the gear icon and "Check for App Updates" to see if it will recognise that LR needs to be updated.

Thank you Jim. I have tried signing in and out of the CC desktop app, unistalling and reinstalling, clicking on the gear icon (it states I am up to date. I downloaded the patch and get the attached screen capture when I try to launch the patch. I must be doing something wrong at the core maybe? 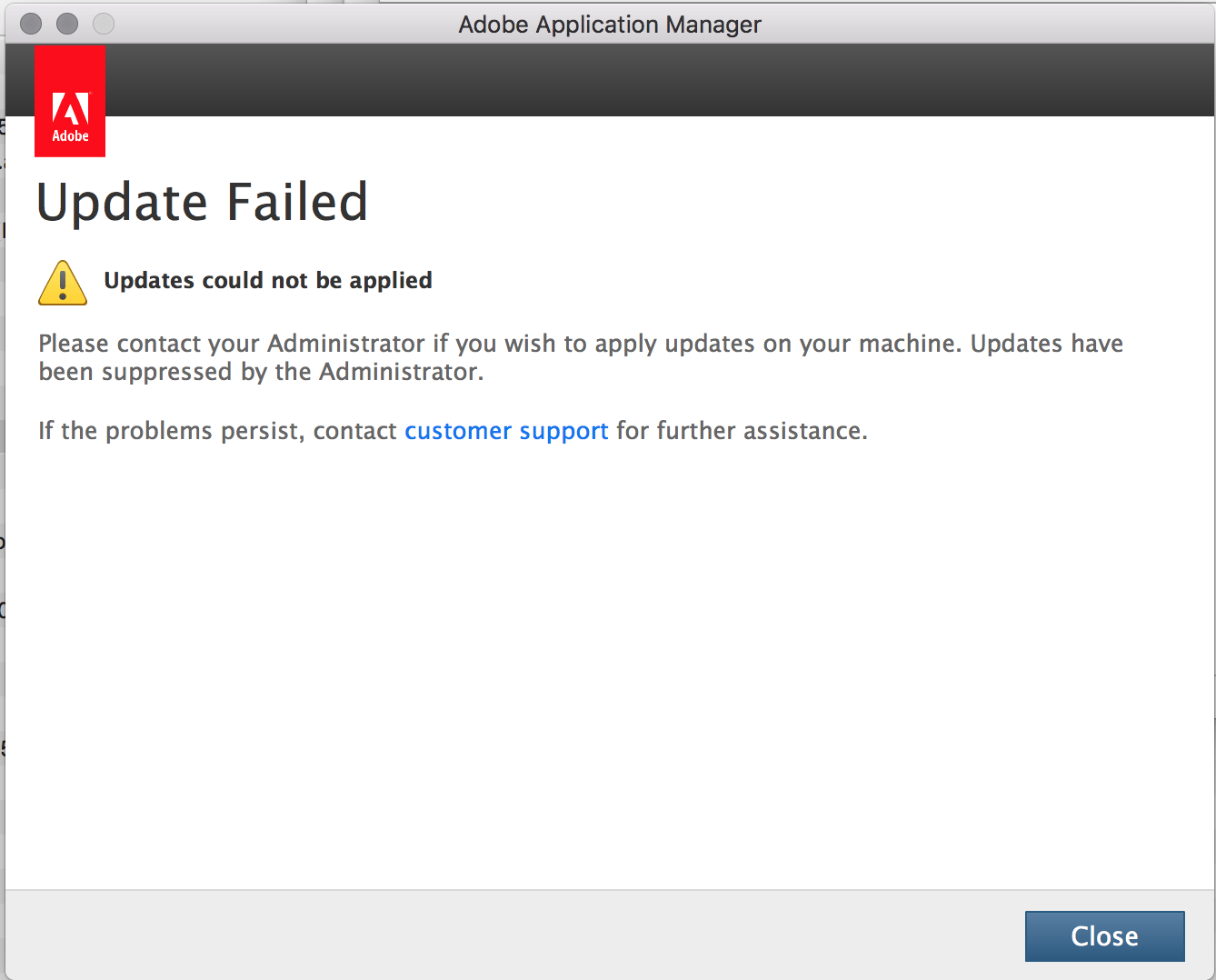 This message suggests that you are not signed in with an Administrator account on the Mac. In MacOS go to system preferences and make sure your signed account has checked the check box labeled "Allow user to administer this computer"
-- Cletus D. Lee --

Thank you Cletus. I sign in as the admin. of my laptop. I can totally see where the message would suggest I am not, it was one of the things I pondered and double checked. My dread is that I am doing something equally as silly but, at this point I would welcome any answer that would solve my problem! Though the right to administer is checked while being grayed out, maybe that is something odd, I am not sure. 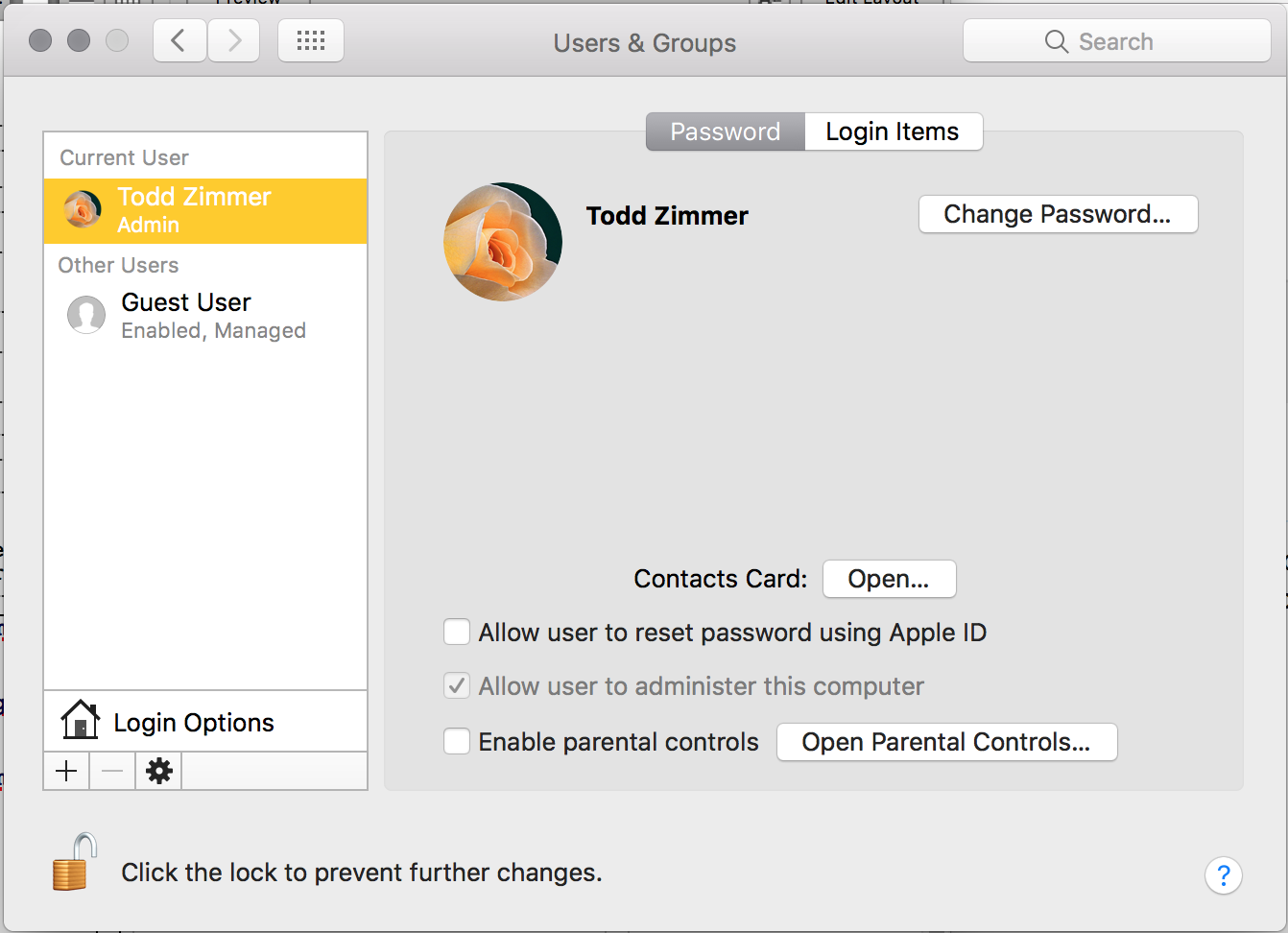 Having said that, I do agree that the error message seems to suggest this... It may be a good idea to check the permissions of your Lightroom application folder, and to run Disk Utility to check for and repair permission problems.
Website: Johan W. Elzenga
Facebook page: Johan W. Elzenga, photographer

Use the CC app to remove Lightroom from your computer. Then use it to install the current version.

BTW, if you're checking the permissions of the Lightroom application folder: both 'system' and 'administrator' should have Read & Write permissions. You check this in the following way: open the Applications folder, single click the Lightroom folder to select it and then choose 'Info' from the Finder menu (or type Cmd-i). The permissions are at the bottom.
Website: Johan W. Elzenga
Facebook page: Johan W. Elzenga, photographer

Thank you Johan, the permissions were and are as you stated and in Sierra there is no longer an option to "repair permissions" of a disk. Though I have run "first aid".

Thanks you too John, I had already tried unistalling and reinstalling through CC.

What a pain this is.

Todd Zimmer said:
Thank you Johan, the permissions were and are as you stated and in Sierra there is no longer an option to "repair permissions" of a disk....
Click to expand...

With System Integrity Protection, you don’t need to repair permissions at all.

OK. Thank you Cletus. I don't think I need to change my permissions since I can address the laptop as administrator for everything else, just issues with updating LR. I think there is a disconnect between my machine and Adobe CC but can't get through to there customer support (only directed to their chat room) and the suggestions here, though good, don't seem to resolve my issue.

So when you deleted Lr 2015.0 ia the CC App, then installed the current version from it, what happened? In other words, is this really a Mac permissions issue or one of the CC App failing?

Hey John, When I deleted the 2015.0 version and installed from scratch from CC it installed the same thing. Thanks for getting back to me again.

One final thing you could try: first uninstall Lightroom. Then, if you download the Lightroom trial version (Adobe Creative Cloud desktop apps | Adobe Creative Cloud), you should get an installer that installs CC2015.10.1 directly. During the installation you should get a dialog that asks you whether it should really be a trial, or else you must sign in to your Creative Cloud account. Doing that should finish the installation as a full CC version.
Website: Johan W. Elzenga
Facebook page: Johan W. Elzenga, photographer

OK. Got through to Adobe tech support and it turns out the Adobe Administrator has suppressed any updates beyond 2015.0. My CC membership is an enterprise version for all the Apps with my work colleagues. Not sure why a single application would be restricted to a certain version. I'll check into it when I get to work in the morning. Thank you all for your help. Worst comes to worst I'll get an individual membership for PS and LR only. Is there a reason to stay with CC or is the LR 6 stand alone better?

Todd Zimmer said:
OK. Got through to Adobe tech support and it turns out the Adobe Administrator has suppressed any updates beyond 2015.0. My CC membership is an enterprise version for all the Apps with my work colleagues. Not sure why a single application would be restricted to a certain version. I'll check into it when I get to work in the morning. Thank you all for your help. Worst comes to worst I'll get an individual membership for PS and LR only. Is there a reason to stay with CC or is the LR 6 stand alone better?
Click to expand...

That's for you to decide. The stand alone version does not contain all the new features that were introduced between CC2015.1 and CC2015,10, such as Dehaze and Guided Upright.
Website: Johan W. Elzenga
Facebook page: Johan W. Elzenga, photographer

Thank you everyone for your insights and help. Here is what ended up working:
1. Run CC Cleaner and restart (thank you for the link Victoria).
2. Uninstall all Adobe applications and Adobe Creative Cloud, restart.
3. Remove the updater preferences located thus:
3a. "shift+command+G"
3b. go to folder "~/Library"
3c. open folder chain: Application Support/Adobe/AAMUpdater/1.0/
3d. delete this file: AdobeUpdaterPrefs.dat
3e. (thank you Alok at Adobe).
4. Downloaded CC via a direct link as directed by Adobe Chat (Adobe CC 2017 Direct Download Links: Creative Cloud 2017 Release).
5. Installed, restarted, logged in and am good to go as yo can see from the below screen shot.

I had exactly the same problem you had which I discovered last night for the first time when Lr would not recognize .nef files from my new camera. I had no updates showing in the CC app manager so I downloaded the same updater you used and had the same error that you received. So then it took me about an hour to resolve but it worked. This was my solution:

1. I signed into my CC account.
2. I poked around a bit and found the product page for Lr which has a download link. Reinstalling a program is one of the last things that I try and I really thought about this for a while. So, I made sure that I had the catalog backed up, and did the download and install which went quickly.
3. I opened the new installed version and saw that my catalog was still there (good) but it was the same initial version of Lr as you showed in your original post (not so good).
4. I then checked the CC app manager and noticed that, this time, there were now updates to install. Once that ran, I was up to Lightroom version: CC 2015.10.1 [ 1117303 ] and all was well.