I can't figure out the difference in the distortion between the jpeg and RAW files. Is there a way to be able to view only what the camera interprets?
Sort by date Sort by votes

Yes. I assume you're shooting raw + jpeg. So when you import, in the Preview options choose Embedded and Sidecar. Secondly, in Preferences ensure that you are not handling the raw+jpeg as separate files.

What this does is import the raw files and build the initial preview using the jpeg sidecar, not Adobe's treatment.

Yes, shooting jpeg and raw. I made the changes to the import however I'm still seeing a difference between the two, distortion between the jpg and raw files.

Shooting with Fuji I like to have jpg's too so I can take advantage of film simulation. At times, the jpeg is good enough and I share that. I'd like to view both so I can quickly decide which one I want to work with.
Upvote 0 Downvote

Might you have specified a Develop preset in the Import dialog? If you haven't, Import's Embedded and Sidecar option should build the preview directly from the JPEG and so you should see the Fuji-baked appearance. But if you apply any adjustment, then LR processes the raw data Adobe-style.

Another variable is what you are using to compare the two.

Look at the badges on these two thumbnails which I imported as above. So you see raf+JPEG (ie they're managed as a single file and I never see the JPEG). The first one has some adjustments (crop and sliders icons at the bottom right), but I've not yet done anything to the second and so you can see a two arrows badge which indicates that LR is using the Embedded Preview. 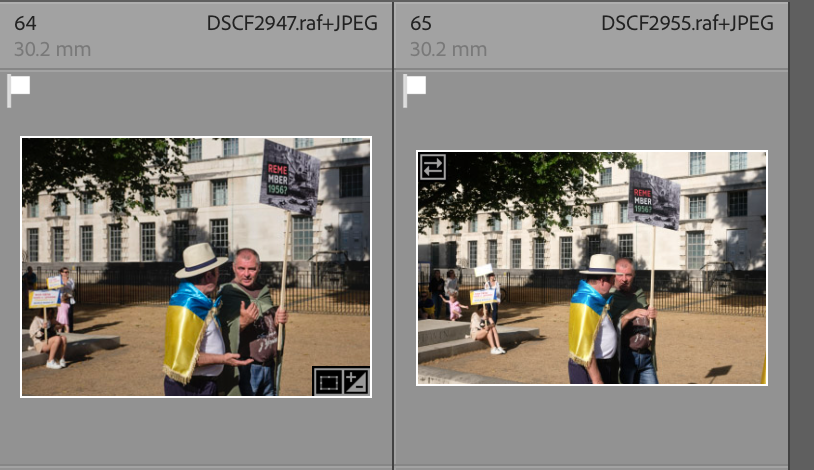 I have enabled Embedded and Sidecar. Secondly, unticked handling the raw+jpeg as separate files and set using Camera Settings in Preferences.

I show your example. When I click on embedded preview, I am then shown a different level of distortion. The view shows more barrel distortion. I also tried this by opening the jpg and raw file straight from the card into Photoshop. I am very confused, I've been using Lightroom for years with Nikon and never had any issue like this.

Also, with Embedded and Sidecar, am I correct in understating that this is the Fuji profile, I see that in the development module under profile. So now if I make any corrections, I am correcting the jpg interpretation from the get-go along with being too able correct as if I'm straight in Raw.

When I flip between the library and quickly to the develop module, I see the image 'warping' for split second.
Last edited: Aug 7, 2022
Upvote 0 Downvote

When LR imports any file, it has to build a series of previews, from thumbnail sized up to 1:1, which are used to display the image in the grid or when you zoom in. Normally, it would do this by processing the raw file and applying Adobe's Camera Raw algorithms.

However, when Embedded & Sidecar is selected in the Import dialog, LR builds its previews by copying the previews which the camera "embedded" in the image (you see these on the camera LCD). If there is only a raw file, LR quickly extracts and copies whatever previews the camera stored in the raw file - up to full size in Nikon's case, but not in other raw files such as Fuji. So LR can show Fuji camera-generated previews in the grid, but when you zoom in 1:1 it is forced to process the raw data and build a 1:1 preview. You can avoid this processing by importing Fuji raw+JPEG pairs, allowing LR to build its previews by extracting and copying full size JPEGs.

The settings I've mentioned will only be affecting newly-imported files, not existing ones. But it sounds like you are importing.

Also, It's only in Library where you can see the exact Fuji-written image. In Develop you are processing the raw data, and applying whatever profile you chose (Camera Settings means Adobe's attempt to match Fuji's rendering). I wonder if you're seeing the effect of lens corrections not being applied until Develop has loaded all the raw data.
John Beardsworth Photographing, Writing, Advising, Coding , Brewing, Pasta-making
Books: Advanced Digital B&W Plug-ins: Search Replace, OpenDirectly, Syncomatic, List View, Video Metadata Web: Photography - Instagram - Lightroom Solutions