I am curious if people have a better solution to this problem than I have found.

I thought to use Split Toning, but as you can see below it appears to not work well at least with lighter skin and uniforms (since despite being in shadow they are bright).

Here's a multi-image example of what I might do. I'd appreciate advice if there are better ways.

Here's the image straight out of the camera (except cropped):

Here's a bit more pop from my standard global preset and custom profile to match the camera. Uniforms are still blue, skin still off.

So next is the first dead end -- I tried setting a global white balance for the shadows. I took a sample off the socks (the jersey actually does have a bit too much blue in it). And it actually does a reasonable job on the jersey and face. But the background is WAY too warm, just plain yellow. 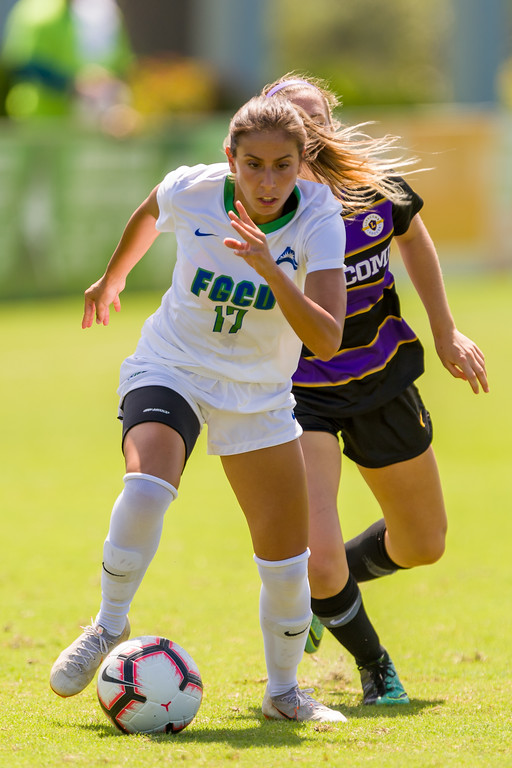 The below is a subtle change and more important in some shots than others, but I de-saturated the grass a bit and darkened it. How much this is needed depends lot on the angle, as the grass is surprisingly reflective of the sun.

Didn't do anything for the shadows though. So here's an attempt at split tone, though it requires a lot of explanation. I picked red and full saturation so it would appear as something of a mask of where it thought the shadows were. The problem here is that there's no balance setting that works -- the white shirt, ball, and even some of the background is such that before it just starts to be masked (looking at the shirt) WAY too much of the image is also being effected, not just that which is in shadow. I could simply not find a way to do this well, and (in LR anyway) you cannot selectively use split toning, it has to be global (or apparently so).

So I gave up on Split Toning, which is unfortunate as that would be far easier to use than the alternative, where I then painted on an area, used luminance masking in addition, and then added a bit of warmth, brightness, white point and a bit of red tint to get this.

I'm still not very happy with the result, but I think it's better. Or I think so. Here's a side to side comparison at 1:1 zoom. 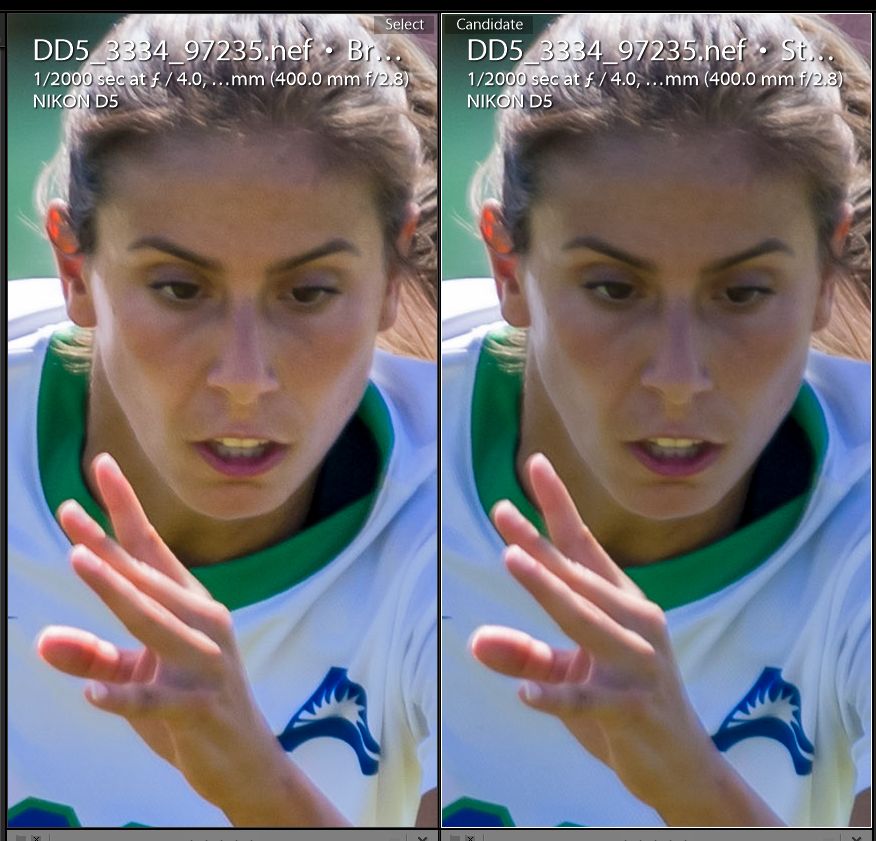 Now one could argue perhaps I should have used a bit more red, or a bit less yellow, or.... whatever. The global white balance gave better skin I think, but cutting that out and combining would be a photoshop task, and for speed am trying to do this in LR and with the minimal painting-type adjustments I can do.

My question is more basic -- is there a better approach, a better workflow in general? Painting on and trying to mask (using any of the various tools) is a real pain, and not easy if you are doing 40-50 of these at once.

Sure, I can lighten shadows -- but how can I fix the colors in them better than doing it all by hand?

Is there any mileage in using the camera calibration adjustments? Using that, you can shift very specific colours from the colour wheel without shifting the rest. You can lock others back.
Open the raw file (as a DNG) in the DNG Profile Editor and adjust specific colours, export the profile and see if that does what you want. You can then bulk apply it.
You can have a go at the tone curve and if you must the primary colours too (though this latter is intended for drastic alterations more relevant to eg an IR conversion (of a camera)).
And, if you have shot a MacBeth ColorChecker chart in the same lighting you can get an automated starting point.
Upvote 0 Downvote

I do have a MacBeth chart and have built a camera specific profile, but for sunshine. But that's an aside...

The issue with using anything global so far is illustrated in #3, the color temperature needed in the shadows is very different from in the sun. At least that's where I keep getting stuck.
Linwood Ferguson www.captivephotons.com LR Classic, Windows 10x64, Was Nikon, now Sony A9ii/A7Riv
Upvote 0 Downvote
L

You might be heading to a layers editor.
Upvote 0 Downvote

The (albeit small) advantage of the calibration profile is that it is easy to bulk apply. So it might get you closer. The obvious snag is the global nature of it. But then, LR is a global editor at heart.

I can't see why it would work, but have you tried Dx0? Just occasionally the Dx0 automated approach works magic and blows LR away.
Upvote 0 Downvote

LRList001 said:
I can't see why it would work, but have you tried Dx0? Just occasionally the Dx0 automated approach works magic and blows LR away.
Click to expand...

No. I'm almost afraid to, I'm so wedded to the publishing workflow in Lightroom to maintain a web site. I guess I could edit-with and keep it in LR.

I was hoping someone smarter than me had a magic solution, a "select only shadows" button (that finds shadows not just low-luminescence areas).
Linwood Ferguson www.captivephotons.com LR Classic, Windows 10x64, Was Nikon, now Sony A9ii/A7Riv
Upvote 0 Downvote

Changing White Balance in shadows only
Not sure if this will answer your question, but here goes-
1. Apply a Gradient to the whole image, (Start outside the image and drag AWAY from the image)
2. Select 'Luminance' in the Range Mask
3. Adjust the 'RANGE' slider to limit the gradient to the shadow areas (press [O] to preview the mask overlay)
4. Adjust the 'SMOOTHNESS' slider to feather the mask edge.
5. Set the 'White Balance' sliders as required.

@I-See-Light, thanks, but I am unclear how that differs from the split toning, it works nicely if those things in the shadows are indeed darker, but that's not the case in my example -- the jersey in the shade for example is still brighter than some of the sunlit background.
Linwood Ferguson www.captivephotons.com LR Classic, Windows 10x64, Was Nikon, now Sony A9ii/A7Riv
Upvote 0 Downvote
Z

LRList001 said:
The (albeit small) advantage of the calibration profile is that it is easy to bulk apply. So it might get you closer. The obvious snag is the global nature of it. But then, LR is a global editor at heart.

I can't see why it would work, but have you tried Dx0? Just occasionally the Dx0 automated approach works magic and blows LR away.
Click to expand...

If doing a lot of edits DXO takes far too long to export files back to LR, if you use Prime. About half the time without it. Just tried one sans prime - 30 seconds. I'm not sure Smart Lighting or Clear View would correct that to a desired degree. I'm trying to find something similar to test.

Then there is the colour. It won't apply any LR settings but I see a place for ICC profiles. When I send a file to DXO (mostly for Prime and tougher NR) I just use the camera rendering profile. Exporting back to LR depending on what you want to maintain you have to choose between DNG or TIFF. It slows down the workflow. For a few files it is OK.
Upvote 0 Downvote

Ferguson said:
@I-See-Light, thanks, but I am unclear how that differs from the split toning, it works nicely if those things in the shadows are indeed darker, but that's not the case in my example -- the jersey in the shade for example is still brighter than some of the sunlit background.
Click to expand...

The Range Mask function can be used for the highlight tones also.
You can use the Radial filter to apply a gradient over the person to include the white jersey, set the luminance limiting sliders to the highlights, adjust WB and exposure sliders. Also a brush (with automask) will easily brighten skin tones.

I had not tried the radial filter, that might be a little quicker than the brush. It still results in a need to manually place them.

Again, what I was hoping for was a technique, like split toning, which could be applied en mass to a series of shots from similar angles (with different subjects of course). When editing sports shots it is all about speed. Anything I have to brush on or position and then sample to select takes a lot of time.

But ... it may be the only approach. Thanks for adding radial to the possibilities.
Linwood Ferguson www.captivephotons.com LR Classic, Windows 10x64, Was Nikon, now Sony A9ii/A7Riv
Upvote 0 Downvote
Z

I tried the target selection tool for both saturation and luminance alone and then adding to the range mask settings but again just adds more time. That adjustment alone is pretty quick but still has to be done manually.
Upvote 0 Downvote
H

I sympathise I have the same problem, but worse as here in Australia the athlete shadows are much darker due to the contrast of our weather! I have found it worse since I moved from the D800 to the D850, so I am wondering if the change in matrix metering is the problem? What type of metering have you set for the D5?
Peter.

"There is only you and your camera. The limitations in your photography are in yourself, for what we see is what we are." Ernst Haas
Upvote 0 Downvote