Search for unpublished or modified images in a Publish Service?

I run into 2 situations with Publish Services: (1) I sometimes forget to hit Publish (operator error), and (2) Sometimes when I go back to a published collection I notice a couple of images being modified and marked for republishing, but I know that I haven't made any changes to that image that should trigger this (random LR error?).

I'd like to be able to identify images within a publish service that either have never been published or have been marked to republish. I don't think LR can do this out of the box, but is a plugin somewhere that can?

This is a known gap in the technology. As far as I know there is nothing you can put in a filter or smart collection related to the publish state of images (i.e. which segment they appear in in the Pub Collection grid. There is also no "Publish All" tool that you can use at a Publish Collection Set level or Publish Collections Panel level (all) - just on each individual publish collection. I also have not seen this in any 3rd party plugin but also have not put in a lot of effort looking either.

In regard to images mysteriously popping into the "modified" segment, this too is a long standing mystery. Some publish services plugins (like from jFriedl) have tools where you can indicate what sort of changes should or should not trigger it to move to the "modified" segment but even with those it still random. In my case, whenever I go to a PS collection that has been around for more than a week or two invariable more than half the images are in the "modified' segment. So, I usually trust to memory which ones (if any) I actually changed and I mark all the other as not needed to be republished. And, for me it is even worse at times. Sometimes I'll select all the "modified" images and set them all to move to the "Published" section but only some of them move. I then have to do it again on the remaining ones and sometimes a 3rd or 4th time to get them all out of the "Modified" section. On other occasions, they'll all move to the "Published" section and then seconds later I watch them pop back up to the "Modified" section one by one even through there are no background processes showing and I am not touching the keyboard or mouse. Really annoying.

I have no proof of this, and haven't done the experiments to prove it one way or another, but as not a lot of people have historically complained about this (fewer than I would expect even given the low number of people who use PS's) I suspect that other plugins that are active are doing something in the background that triggers a "modified" flag in the database. Someday I'll turn off all the plugin's except one Pub Serv and see if the problem persists. The other thing that crossed my mind is Cloud sync somehow causing that "modified" bit to flip.

Maybe I'll be motivated tomorrow to play around some more. Thanks for reminding me about it.

Note at least in the one I use (Smugmug) you can click on a top level entry and publish, and it does all the containing galleries. Not sure if that works all the time.

I have had LOTS of trouble both with images going to a modified state when they should not, and staying in a published state when they should be modified, when related to metadata changes. Actual develop changes generally work properly. Basically I just think the underlying mechanics are broken, have been for years, and not getting any love. I know Smugmug has built in a lot of their own checks for this because they didn't trust Adobe so my SM comments may not be relevant to others.
Linwood Ferguson www.captivephotons.com LR Classic, Windows 10x64, Was Nikon, now Sony A9ii/A7Riv

Ferguson, Yes, I see now that my Zenfolio PS's have the "Publish Now" option at the group level. I probably saw that at one time before but as so many images are always in the "Modified" stat at any one time that I choose to ignore it. Thanks for pointing it out.
C

FWIW, Jeffrey Friedl's "Bag-O-Goodies' plugin has a feature called Publish All in Selected Service that will step through each album in a Publish Service and publish any unpublished or modified images. It's not quick, but it's better than going through the Publish Service manually one at a time to find these recalcitrant images.
J

The Any Source plugin's Publish Collections command finds all published collections with photos needing to be published or republished. You can quickly examine those collections and photos and select some or all to batch-republish. You can run publish multiple collections concurrently, to better cope with services like Flickr and Zenfolio that sometimes can be glacially slow. 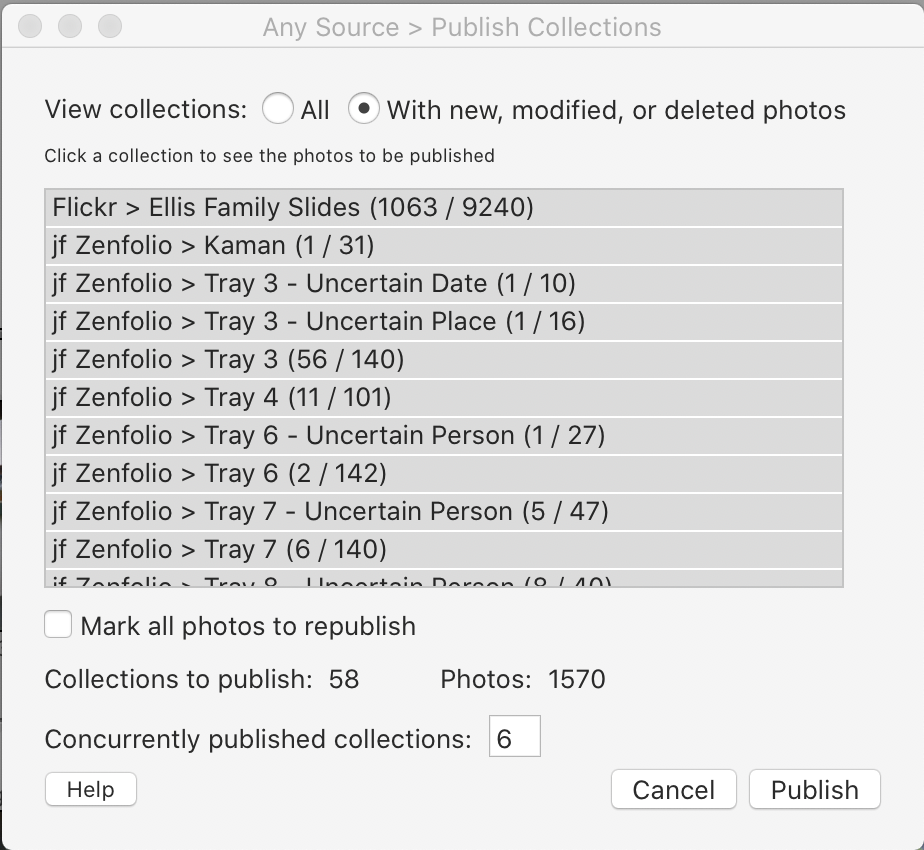