I have set up a watched folder in Documents called Incoming scans set the destination folder called scanned so it should when I import the scans into Lightroom have all the file details and everything should be fine. However when I scan the slides they go into documents but not into the Incoming Scans folder, and when I drag them into the folder they go in and in 2 seconds they disappear why is this? Also on the navigator pane in library mode the scans are there but cannot be found in any of the folders. Getting sick to death of paying £10 per month for something that does not work and I have followed comprehensive videos and still cannot get it to work.

Topgardenboy said:
However when I scan the slides they go into documents but not into the Incoming Scans folder,
Click to expand...

This location must be configured in the scansoftware, not Lightroom.
Some of my photo's on Instagram, my (dutch) blog on DAM: Digitaalfotobeheer and my Stock page.

The watched folder is where LR monitors, and it's then moving the photos where you've told it to move them to. That is why they disappear from Incoming Scans.

Look at the watched folder setup and you'll see the folder where you have told LR to put them.

Topgardenboy said:
when I drag them into the folder they go in and in 2 seconds they disappear why is this?
Click to expand...

Some of my photo's on Instagram, my (dutch) blog on DAM: Digitaalfotobeheer and my Stock page.
T

I attach some screenshots to show if I am going down the right path.

OK, so now a screenshot of the bottom part of the Folders panel....below the dated folders you should find the "Scanned" folder with the "Scans-to-process" sub-folder.
Jim

The screenshot shows why you see the images disappear after two seconds. Anything that is placed in ‘Documents/Incoming scans’ is moved by Lightroom to ‘Pictures/Scanned’, and placed in a ‘Scans-to-process’ subfolder. That is also where you should find them in the Lightroom catalog.
Website: Johan W. Elzenga
Facebook page: Johan W. Elzenga, photographer

Right-click on the single image in the grid and select "Go to Folder in Library".....that will highlight (select) the actual folder in the Folders Panel. Show us a screenshot of the Folders Panel with that folder highlighted.
Jim 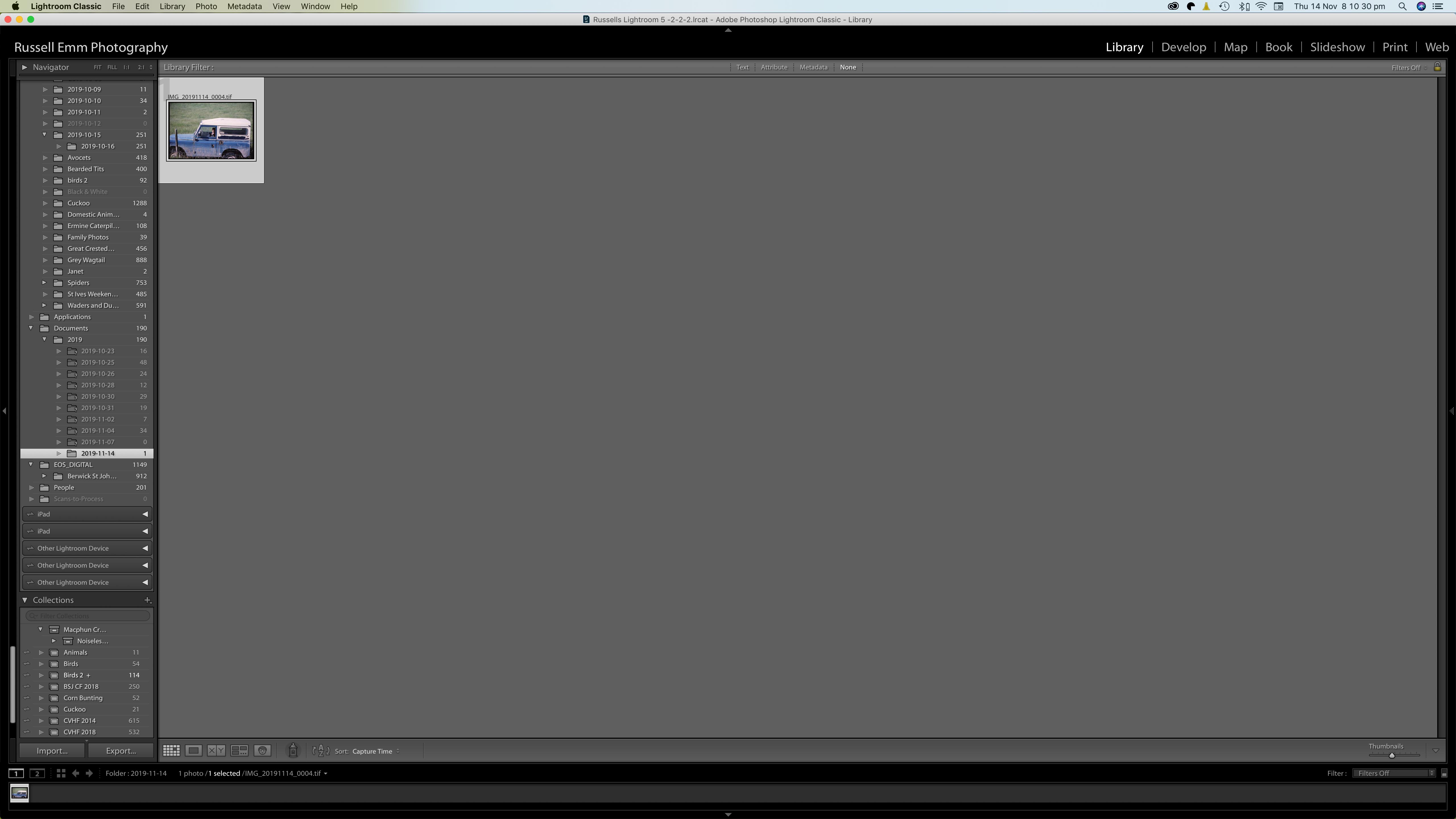 That looks as though you've done a manual import of that file, using the Copy (or Move) option into a Lightroom date-based folder structure. Is that what you have done? The Auto-Import procedure should require no intervention by the user.
Jim

Jim Wilde said:
That looks as though you've done a manual import of that file, using the Copy (or Move) option into a Lightroom date-based folder structure.
Click to expand...

That was also my view. I'm pretty sure that Previous Import doesn't pick up automatically-imported files.

OK, let's go back to the beginning and look at this step by step:

Topgardenboy said:
However when I scan the slides they go into documents but not into the Incoming Scans folder
Click to expand...

Did you change any settings in the scanner software after you wrote this? The screenshot of the scanner software clearly shows they should go into the 'Incoming Scans' folder. The screenshot of the Auto Import Settings shows that Lightroom will then move them to the 'Pictures/Scanned/Scans-to-process' folder. That is what you see when you manually drop an image in the Incoming Scans folder.


Topgardenboy said:
Also on the navigator pane in library mode the scans are there but cannot be found in any of the folders.
Click to expand...

The first screenshot in message 5 shows the scans, I assume, but they are also shown as 'missing'. There is an exclamation mark in the upper right corner of all slide mounts. That means that after Lightroom catalogued these images, they were moved again (outside of Lightroom) and now Lightroom does not know where they are. Which folder (or collection) did you select to show us these thumbnails? The screenshot does not show that, perhaps because the Lightroom window is partly obscured by that Finder window. Do you have any other software running that also automatically moves images that are placed in a folder? A MacOS X Folder Action, perhaps? The Hazel system preference?

The second screenshot of message 5 shows the Lightroom Import dialog. You should not have to use that at all, because you use Auto Import. The import dialog shows the following import attempt (there are no images to import, but this is what you try to do): You are trying to import images that are in your 'Incoming Scans' folder and copy them as DNG to the Documents folder, creating '2019/2019-11-14' subfolders. That is interesting, because in your last screenshots you show one image that does indeed reside in this folder, so it seems you once beat Lightroom to it and did indeed manually import one scanned image (it's not a DNG, so perhaps you used 'Move' rather than 'Copy as DNG'). That makes me wonder what you did with the other scans, but it does seem that you are constantly trying (and apparently succeeding) to override the auto import and messing things up that way.
Website: Johan W. Elzenga
Facebook page: Johan W. Elzenga, photographer

Right starting from the beginning the first SS shows my scanner settings, the second SS shows the auto settings in LR where in the watched folder I made a new folder called incoming scans then in the destination I chose another folder scans to process and then clicked the auto import check box. I then imported the checked photo from documents the next SS shows the photo has been imported the next two SS show the photo has gone into the highlighted folder which is in the documents folder and the next one shows scans to process is empty. The last SS shows the documents folder with the last scanned photo highlighted the incoming scans folder I chose from the auto import settings but I do not understand where the other three folders have come from and why the scanned photos do not go into incoming scans folder also because the documents folder is going to be filled up with individual photos will I lose them in LR if I delete them from documents. I have no other photo or mac software that interferes with this. Sorry to be a pain you will think I am as thick as two short planks but I can't seem to get my head round this.

Screenshot 3 shows that you are once again using the (manual) import dialog, even though you have already setup Auto Import! You should use either one or the other, not both! So stop pressing that 'Import' button or selecting the 'Import Photos & videos' menu. You do not need to do that. Just make sure that Lightroom is running in the background when you make a scan, and the scan should be imported and moved to the correct folder fully automatic. That is what Auto Import is for! Screenshots 3 to 6 show that you are messing this up by overriding the auto import.

One thing is puzzling, and may be where things start to go wrong. Your scanner software is clearly setup to deliver the scans in the 'Incoming Scans' folder, but the import dialog screenshot shows that the (some?) scans are actually in the Documents folder. So unless these are older copies, something is wrong here.

Just to explain why the scans end up where they end up: Your manual import action overrides the auto import setup, and on top of that you also chose the wrong destination settings in that manual import. 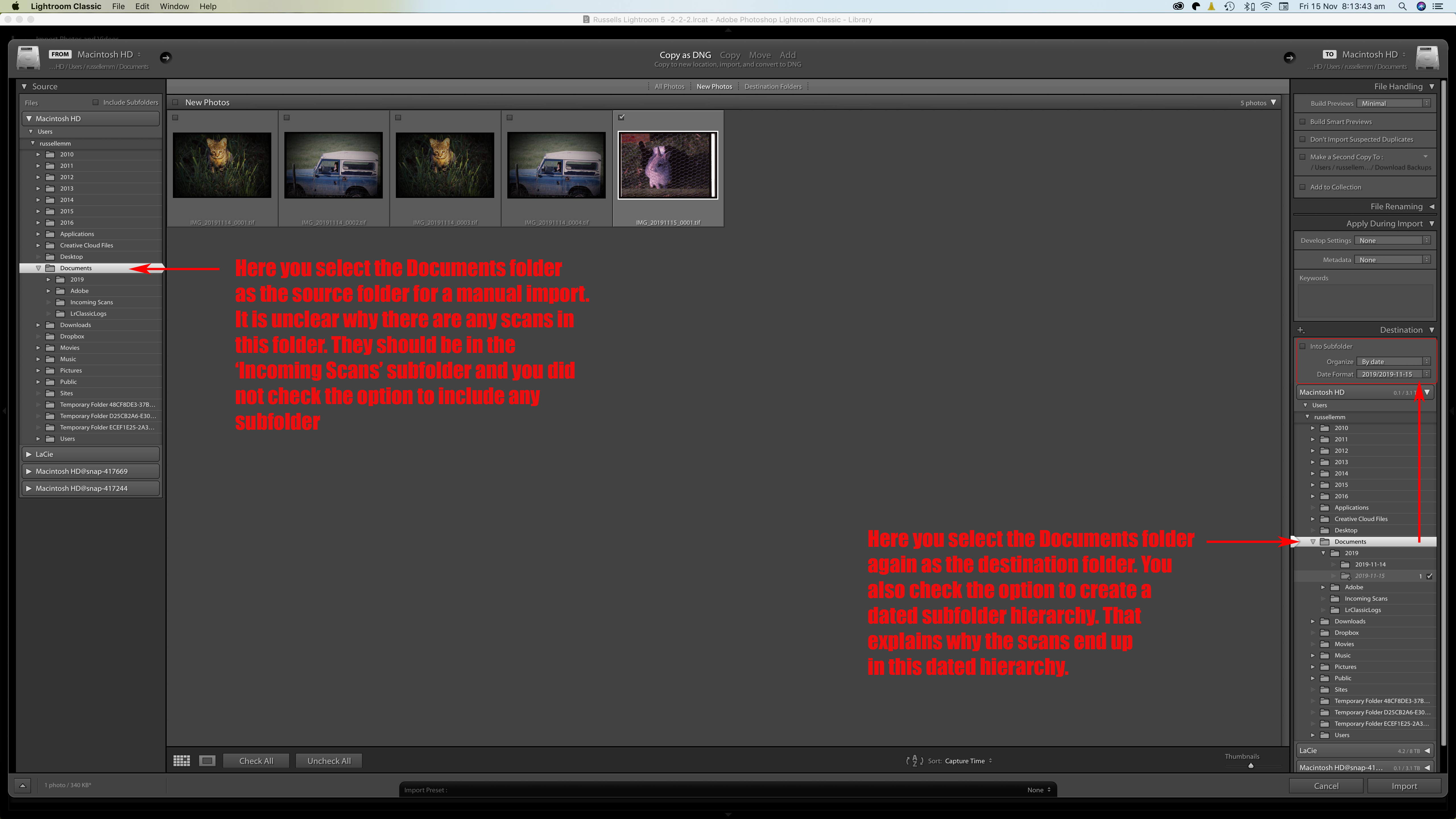 So I have now checked the sub folderbox in LR and on the SS it shows but no photos going in via auto import I have scanned a slide with LR on full screen and minimised and still no auto import I have put in two SS of the scanning destination option. Cannot understand why I can’t auto import. Why when I scan a slide will it not go direct into LR as there is an option on the scanner settings?

It looks like there is something wrong with your scanning software. Despite setting the destination to 'Incoming Scans', it seems that the scan is saved into the parent folder (Documents). First try this: Click on the 'Settings' button and select the 'Incoming Scans' folder manually instead of from that pop-up menu.

I have now uninstalled the Canoscan 9000F MKII and reinstalled from Canons download site the latest one now I get a completely different layout where I can only scan a slide at a maximum of 1200 dpi instead of 4800 dpi and following your post it is no different and still will not auto import.

1. Close Lightroom- In Mac Finder- Create an EMPTY folder on the Desktop- Call it "AUTOIN". ***Important: Do NOT put anything in this Folder. It MUST be empty of files!
2. Start Lightroom- GO Menu: File>Auto Import>Auto Import Settings,
3. In the Settings Dialog-
3a. [Choose] the "Watched Folder" - On the Desktop - AUTOIN ,
3b. [Choose] the "Destination Folder" - If you keep all your photos in a master parent Pictures Folder structure, Choose "Pictures"
3c. In the 'SubFolder' field - Enter "AUTO IMPORTS" (You do NOT have to manually create this folder in Lr!)
3d. Set 'File Naming' and 'Information' only if wanted. Or leave blank.
3e. Click [OK] to exit the Auto Import Settings.
4. In Lightroom- GO Menu: File>Auto Import>Enable Auto Import,
5. In Lightroom- Do NOT Import anything, Do NOT try to manually set up any Folders. Do NOTHING else. Just leave Lightroom running.
6. Start the Scanner Software- ***Set the options to 'Save' the scans in the "AUTOIN" folder on the Desktop.
7. Scan.

Now what happens-
1. Lightroom recognizes that a new scan file has been added to the (empty?) AUTOIN Folder
2. Lightroom moves the new file to the Sub-Folder set in 'Destination' (a Pictures/AUTO IMPORTS folder)
3. Lightroom empties the AUTOIN Desktop folder ready for another file to be added.
Also the AUTOIN folder on the Desktop is a convenient place to Drag&Drop ANY Photo files from Finder, etc, and have them automatically added into the AUTO IMPORTS Folder in the Lr Library.
Even if Lightroom is NOT running- Placing Photo files in AUTOIN folder with Finder will now add them to the Lr-Catalog AUTO IMPORTS Folder when Lr is next started.
T