Import Moved photos from organized folders and want to go back!

If I delete a previous import that I had done as a "move" import, will those photos go BACK to the folders they were in on my external hard drive? That's what I NEED them to do.

I should have hit "add to catalog." Instead, I did "move." Now I have 49,000 photos in one folder on my external hard drive that originally had hundreds of organized folders. I wanted to import those organized folders into LR so I could work with them and organize within LR and not run into a mess, but I created a mess. So if I delete the previous import from LR, what happens to those photos that are right now in one massive folder? And painfully, no, I do not have a backup of those organized folders, but yes, I do have all my photographs.
Sort by date Sort by votes

As Johan said, deleting the entries from Lightroom will not cause the image files to move. You will need to manually move the files back into the folders they were in.

Alternatively just leave them where they are and use Collections and Keywords to filter/view them. Collections are basically just virtual folders that can contain any images you want. So if you click on a Collection all you will see are the images in that collection.
Upvote 0 Downvote

Do you have a system backup taken when the images were in their original folders? If so, restore them, delete the current ones from LR (not from disk, yet) and re-import, properly this time. After everything looks good, delete the files on disk that got moved to the wrong folder.
Hal

Hal,
That would obviously have been my advice too, but...

csherman228 said:
And painfully, no, I do not have a backup of those organized folders.
Click to expand...

Okay, thank you, all! Sad, but I suppose I learned my lesson, and I'm just glad I still have all the photos. Now for hours and hours of cleanup.
Upvote 0 Downvote
P

JohanElzenga said:
Hal,
That would obviously have been my advice too, but...
Click to expand...

During the import process, there is an option to create a second copy of all the imported mages. Yes, it doubles the space you need for newly imported files, but it is a great backup. I delete all my second copy folders a few months after doing import or else when I have done LIBRARY and DEVELOP work on the images.

Of course, I have an automated backup application that includes all newly added photos to my E:\Media partition.

I just import my raw files into a folder structure reflecting the capture date.

Then I use keywording and collections to organise them within light room.

(note the eight photos I took before I set the date on my new camera , and some photos that think they were taken in 1945! ) 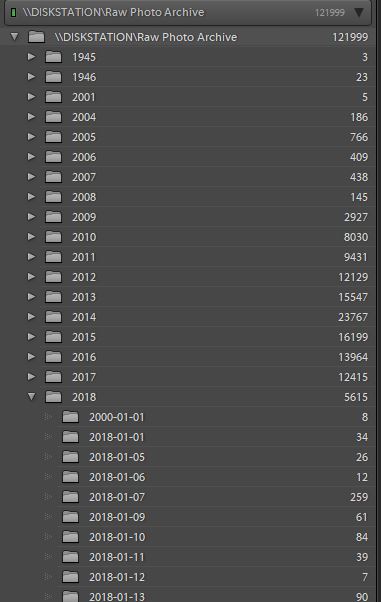