Hi,
my local group perform a spectacle each year and the lighting is all done with coloured LEDS and I have tried changing, modify etc but the end results are not very much better than the originals.
I have included a couple here for the idea. I wondered if anyone can point me in the direction of how to clean these up.
I have Lightroom Classic and Photo 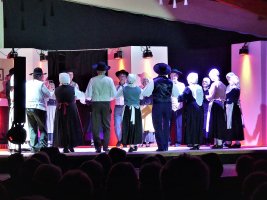 If the LEDs are coloured, they are nearly monochromatic, so there won't be enough colour recorded in your photos to work with. How do you feel about converting to black and white?
Hal

Hi
thanks for your reply. I like B&W but these are for our web site. I have modified some with a making them clearer. The Lighting chap just uses very powerful LED spots in different colours. i suppose it is a matter of having to live with them results.
Thanks
Upvote 0 Downvote

Can you drop me the raw file please @Squeezy? There's something I'd like to try. www.wetransfer.com to [email protected] is often the easiest way to send a big file.
Victoria

Sory a bit late but all the photos are jpg as I did not take them.
They are by different people, some are worse than others.
two photos on the way.
Thanks,
david
Upvote 0 Downvote

Doh, the trick I had in mind was reliant on them being raw, sorry. Thanks for trying though!
Victoria

Many thanks. We are having our annual spectacle this weekend and i shall take some photos in RAW and send next week.
Kind regards
David
Upvote 0 Downvote
C

LED stage lighting can be challenging because it’s capable of much higher saturation and brightness than older stage light types. Good to hear you will be shooting the next batch in raw, that will make things a lot easier.

For this next set that you will shoot in raw:

Watch exposure all the time. Use your camera viewfinder’s highlight clipping indicator and RGB histogram to alert you when the highlights are clipping. Dark areas of a stage can fool the camera into thinking it needs to increase exposure, and if it goes too far, the brightest areas will clip — solid white, no detail. The risk with LED stage lighting is that because of its high saturation, it’s very easy for one RGB channel to clip much sooner than the others. Once a channel clips, you can’t easily edit the color. Be prepared to ride the exposure compensation dial as lighting changes, to prevent faces and other important areas from clipping.

When editing an image where color wiped out detail, try changing the white balance. In the same way that wide LED contrast range and changing conditions can fool auto exposure, the very pure and constantly changing colors of LED stage lighting can cause auto white balance to guess wrong or overcompensate. As long as there is detail in more than one RGB channel, it’s often possible to improve a stage shot by shifting white balance away from As Shot.

The above correction would fail if the image had been shot in JPEG, because JPEG throws out so much original data and locks everything down, so highlights cannot be recovered and white balance can’t be moved very far. If the example above was shot in JPEG, it would not be possible to shift the white balance far enough away from blue to make the faces visible.

You can see a lot of these problems in videos of stage performances taken after LED lighting became common, like the stage behind a singer appearing a blinding solid red because the pure red LED absolutely saturated and clipped the red channel, obliterating any detail.
Upvote 0 Downvote
You must log in or register to reply here.
Share:
Facebook Twitter Reddit Pinterest Tumblr WhatsApp Email Share Link
Top