I continue to be frustrated by Lightroom's diversion from conventional PC protocol. But I now find myself in an area of discomfort fearing that I may lose a couple of month's work.

I try to prevent such data loss by mirroring my LR catalog on a different drive in case I make an inadvertent error. But now I find that my mirroring efforts may have been in vain??!

My latest work of a few days ago is saved (I think) in the lrcat file on my "L" drive in the first screen capture. But on opening the catalog I see the same number of files in the backup catalog in drive "O" (second screen capture). How can I save my changes to a new catalog to ensure that I keep my latest changes saved? I'd like your advice before I save any files to a different directory and run the risk of losing work. Which lrcat should I open and continue working in?

Thanks for our help. 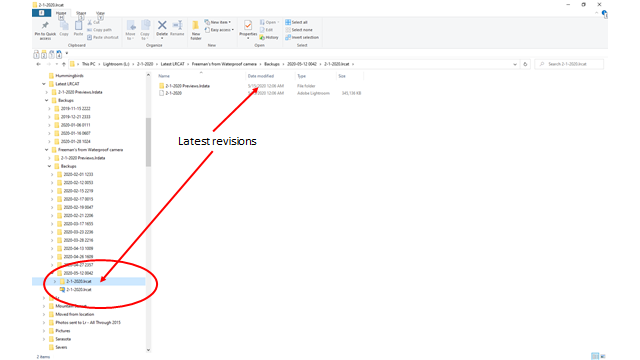 A higher resolution of screen captures....

When you let Lightroom make a bakup on closing you have what you want. You can put that backup on the different drive.

Mirroring is what is says, it's replicates all changes on the source to the destination, aditions and deletions. A real backup lets you go back in history.
Last edited: May 15, 2020
Some of my photo's on Instagram, my (dutch) blog on DAM: Digitaalfotobeheer and my Stock page.
Upvote 0 Downvote

Mirroring does just that mirrors a file to another location And that includes mistakes What you need to do with alll of your critical data including image files Lightroom catalogs and other critical documents is to use a real system backup app. In addition to the included Time Machine for Macs, I use Acronis which is also available for Windows. b I use this in addition to the Lightroom copy (called backup) when Lightroom Exits With a true system backup app you can go back in time to a version of a file that existed before the euro occurred.
-- Cletus D. Lee --

What software are you using for mirroring? I think you will have a challenge because the LRCAT is an SQLite DB. DB mirroring can be complicated by how/when the tables are updated in relation to any journal files used. I'm not familiar with SQLite.


lbeck said:
How can I save my changes to a new catalog to ensure that I keep my latest changes saved?
Click to expand...

You need t to check if SQLite supports mirroring. It may be that there are some workfiles in \{user}\AppData\Adobe\Lightroom that also have to be mirrored. These would be work files associated with SQLite DB operations.


lbeck said:
in case I make an inadvertent error.
Click to expand...

Not sure what type of error you care contemplating you'd make that could corrupt the DB but as noted above, performing frequent backups may be a better alternative.

Also remember that if you are using XMP side car files in relation to your RAW files, this is a backup of your current settings as well. You don't have history and likely other features like stacking but it is a recovery point.
Upvote 0 Downvote

Thanks for all the help and suggestions.

I'm not really in bad shape because I haven't lost anything - just curious as to how my backup now looks just like the master and I don't think that I updated it since February. I'm not beyond making a mistake and this can happen with two HDDs with the same name but different drive letters. When I want to launch Lr from the backup I simply use disk management to change the drive letter.

The protocol that I developed due to loss of a HDD last year is explained in this thread.

I won't pursue this further. I think that the best way to preserve the backup is to physically remove it from my computer. Until now I've kept both the master and backup hooked up.
Upvote 0 Downvote

lbeck said:
I think that the best way to preserve the backup is to physically remove it from my computer
Click to expand...

The best way to backup is to use a system backup app as I described previously. Making copies using mirroring or other is not backup. Do look into one of the system backup apps for your OS (Acronis is the one that I mentions but there are others that over versioning) These will allow you to recover any version of the bad file from any point in time not just the latest version copy. I have gone back as fart as 6 month to recover from some stupid user error in my Lightroom Catalog that affected ~2000 images.
-- Cletus D. Lee --