I'm trying to sync photos from my LR Classic desktop collection into the Adobe cloud. The CC cloud also contains a number of photos that were sync'd from my phone through LR mobile.

What I expected to happen was that, as the desktop photos were uploaded, they would be put into a their own album (with the same name as the collection from which they came); however, what is happening is that they are just being put into the 'All Photos' category and not being separated in any way from the photos that are already there. I can create a new album in CC Cloud and drag photos into it, but to collect everything myself would be a lot of work as there are over 200 photos in this collection that are now mixed in with 400 more photos that were already there.

From what I've read, LR Classic should behave as I expected, uploading the desktop photos into their own album. So, my question is, am I doing something wrong or just misunderstanding how the process works?

Thanks for any advice you can offer!

It depends on what you did when you synced the photos from Classic. The typical way would be to put them into a dedicated collection (or collections), and you then enable the collection(s) to sync. That WILL create an album in the cloud with the same names, and you will find that it contains the same images as in Classic (although in the cloud they will only be smart previews).
Another way of syncing images from Classic would be to add the images to the All Synced Photographs special collection in the Catalog Panel, at which point they will be synced to the cloud and will appear only in the All Photos view. Even if those images are in collections in Classic, that collection information will not be passed to the cloud unless the collections are also enabled for sync.
Jim

Thanks for getting back to me so quickly.

The process I used was the first one. Perhaps somehow the configuration got corrupted? Is there a way to reset the sync process? If it helps, I don't care about the photos that are currently stored in the cloud. All are stored elsewhere and can be recovered, if necessary.

The Album "Costa Rica 2020" was created manually. It currently has one photo in that I dragged there as a test. 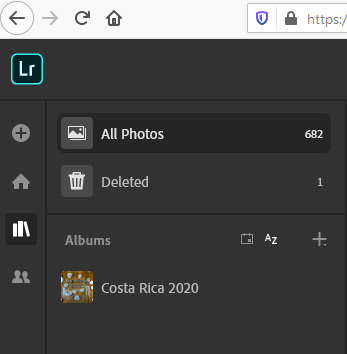 Above the Identity Plate in Classic, does it indicate that syncing is in progress? If so, can you post a screenshot of the Preferences>Lightroom Sync tab? It looks as though the collection in Classic has a sync activity in progress (the 3 dots below the sync icon suggest that), so it would be useful to see what is actually trying to happen.
Jim

The Identity Plate indicates that is currently Syncing 2 photos; This has been going on for a long time now. At first I thought, as I continue to make changes to pictures in this collection, it was just re-syncing these changes; however, it always seems to be two photos being synced. Is there any way to tell which photos it's trying to sync?

I confirmed that there is still one photo in the Album. Previously, this Album did show this fact; however, it is no longer doing that. I logged out and logged back in and no change.

Doug Carson said:
Is there any way to tell which photos it's trying to sync?
Click to expand...

Yes, that's why I asked for a screenshot of that Preferences>Lightroom Sync tab.
Jim

Sorry, I misread your request.

Try rebuilding the Sync Data file....in that same Preferences>Lightroom Sync tab, press and hold the Alt key and you should see a "Rebuild Sync Data" button appear. Click on that and wait for it to complete (it should close and restart Classic automatically), then wait to see if syncing resumes.
Jim

That fixed the problem! It cleared the pending 2 photo sync on the ID Plate and created a new Album in Cloud CC containing all the photos from the desktop collection. The only thing is that Cloud CC no longer seems to show how many photos are in an album.

The one thing I've noticed about LR is all these hidden features that become available when you press the modifier keys, like ALT. I understand their usefulness as accelerators, but when it comes to system features, such functions should be obvious, in my opinion.

Thank you very much!

Doug Carson said:
The only thing is that Cloud CC no longer seems to show how many photos are in an album.
Click to expand...

Good to hear! Regarding the album photo count, most of the "cloudy" apps do show it (i.e. Lightroom Desktop, Lightroom Mobile), but Lightroom Web does not....so if you want to see the count, try running the LR Desktop app instead of the browser-based LR Web.
Jim