Editing in Raw vs TIFF vs DNG- impact of external editors

I have reviewed what I find on forums and also google searches and am not clear on the answer. The question is do you lose anything by editing LR classic in TIFF vs Raw vs DNG. The impact is primarily with the use of external editors. For example if one wants to use Topaz AI Denoise they suggest using that first and then importing back into Lightroom as a TIFF (16 bit). If that is done does one lose any of the flexibility of editing in Raw in Lightroom (any decrease in ability to adjust exposure, highlights and shadows or color profile etc)? Most if not all external editors of course require conversion into something like TIFF even Photoshop. If nothing is lost timing of the conversion is unimportant. If some flexibility or functionality is lost one would want to do the conversion as late as possible in the editing process.

A different but related issue, if one uses DxO PhotoLab for it's distortion and noise reduction the options are to export as TIFF (16 bit) or DNG back to Lightroom. Is one better than the other?

These 3rd party apps only work on an RGB image A Tiff image file is recommended because opening, decompressing, editing and Saving an image back to the original file is a lossless process. Whereas an 8 bit JPEG is in addition to having less colors to work with always results in data loss from the file that was used to open and edit. So, the recommendation for the best RGB image to send to deNoise. Etc is a lossless 16bit RGB file format. DNGs are a different animal and the answer is “It Depends”. RAW image data can be saved in a DNG wrapper and nothing is changed in the data. Once converted to RGB, the data can be saved as a lossy or lossless , as 8 bit or 16bit color image. So if your app asks for a DNG, you want to export from Lightroom as a 16 bit lossless RGB image.

Using a parameterized editor found in Lightroom does not destroy the underlying RAW file because Export files are derived from the edit parameters and the original.
Once a a file is sent to your 3rd party app, that RGB file is altered by the app which is a destructive editor.

Forgive me if you already know this, but the advantage of processing in a RAW image, including DNG, is that you can always go back to the very beginning and start all over, using LR or any other processor. DNG (which is the only RAW format I use) stands for Digital Negative (where's the G, I know...). I've gone back to images from 10 or 12 years ago and produced far better results than I could ever do if the image was only a TIF, partly because my skill level is higher, but also, and perhaps mostly, because the tools are vastly superior than back then. Also, the computers are more powerful and storage is much cheaper, all of which adds up to increased ability to produce higher quality images more quickly.

I shoot a lot of architecture and some portraiture, and these images very often end up in PS and the various plugins because I cannot get the results I need in LR. However, even then, I've gone back to the original DNG and started over with better results. LR is always non-destructive, of course, whatever type of file you use, but you can only work with what you start with, and DNGs, roughly speaking, allow you to push around the image in ways that you can't in TIFs. For instance, I know a celebrity photographer who produces imagery used on posters and other kinds of promotional material. He flies into L.A., shoots like mad, and delivers RAWs to the retoucher without doing much - if anything at all - to the images himself.

Biggest drawback to my ind is losing the original controls of a raw file. For example, if you import into Ps then save as a TIFF file, you don't get the temp / tint like you do with RAW.
Paul
E

Thanks all. I would always save the original raw and know there is no choice but to go into a TIFF format for external editors. If a TIFF is edited in Lightroom you can always go back to the original TIFF too since Lightroom is nondestructive. So my question is what Paul is alluding to, i.e. what can you do in RAW that you can't do or can't as well in TIFF. Testing, I see I lose the ability to change the Profile and the White Balance. Do I lose anything else- how much exposure can be pushed, etc?

Yes, I think you have to realise that there are two different things at play: Lightroom is a non-destructive editor, so you can always go back to the beginning. That applies to any file type you use in Lightroom, so also to TIFF. The other thing is that the raw file format has more flexibility than RGB formats. You can still set the white balance, where that is ‘burned in’ for RGB files. And you have some extra room in the exposure. A slightly (up to one stop) over exposed image can be completely saved in raw, while clipped highlights in RGB are lost forever.
Website: Johan W. Elzenga
Facebook page: Johan W. Elzenga, photographer

I agree with Johan. I don't exactly understand how or why this works, but you can manipulate the highlights and shadows in a more pleasing way in a RAW image, really pushing the image hard - this is so much of what matters to me. And the ability to use Clarity and similar settings and brushes to deal with contrast edges is really powerful. And for blending, to be able to use plugins such as Enfuse to work with RAW is also great. While noise reduction / sharpening in LR has gotten very, very good, some plugins, both in and out of LR can make life even better.
E

Thanks. That is exactly what I was wondering- how much flexibility we lose with TIFF over RAW. Seems like it would be best to correct color and exposure, highlights, shadows as much as possible then before going out into an external editor. Correct? Anything else that would be optimal to do when feasible before round tripping to an external editor as a TIFF file?
B

If you export to a TIF or PSD as a 16-bit file, in ProPhoto, you'll have about as much information in those files as possible, meaning that you'll be able to push them around more without getting crummy results, for instance, being more likely to have smooth gradations in tone and lack of pixelation or "highlight" profiles on edges. Exporting to these formats will result in bigger files, but in this case you get what pay for.

EliotNierman said:
So my question is what Paul is alluding to, i.e. what can you do in RAW that you can't do or can't as well in TIFF.
Click to expand...

I work with RAW files straight from the camera. I finish over 95% of the processing using only Lightroom develop tools. Sometimes I'l make a Virtual Copy and process differently for a different end product. Of those few images that require Photoshop or some third party plugin, I complete the work in that app and the RGB file returned ids the finished product. You don't need any additional LR processing on the file returned from Photoshop or some third party plugin. For any one sophisticated image workflow I have at most 3 files (Orifinak RAW, intermediate derivative TIFF and the Exported final image or print.
I think your question really should be, what has to be done with a third party tool that can't be done with the Camera RAW image using Lightroom alone?
-- Cletus D. Lee --

Have you not looked at using smart objects? So from LR, one uses Send to PS as a Smart Object which creates a TIFF with a smart object layer, and many plugins will work on this layer.

One big benefit is that the raw data can be re-edited (double click the layer thumbnail), and the plugin is applied as a "smart filter" which allows you to reopen the plugin - here I'd double click Silver Efex to launch it and change the effect.

A second advantage is that it's easy to apply the same effect to another photo in PS - here I'd drag the Silver Efex and drop it on the smart object in another file.

It's a more non-destructive workflow, you keep the potential benefit of raw over TIFF, especially in highlights and shadows, and your plugin work can also be fine tuned afterwards. 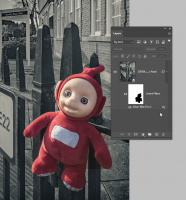 Eliot. Your last paragraph in your original post references DxO. As I understand it, it makes little difference whether you pass a file to Lightroom as TIFF or dng. The point being that it's a linear dng, which is different from the file you get if you use the dng converter on your native RAW.
You must log in or register to reply here.
Share:
Facebook Twitter Reddit Pinterest Tumblr WhatsApp Email Share Link
Top