Counter in "Folders" window not updating

Hi everyone; I’m new here, so please forgive if this has been discussed ad nauseam, but I can’t find anything about it.

I keep my photos organised in two main folders: one for my old iPhoto library and one for anything newer (each folder is further sub-divided on dates).

My question is about the total picture count shown for the folders sometimes not updating after an import, as shown in the attached screen shot.

Admittedly this is a very minor bug, but I wonder if others get the same. I’m running LR 6.9 (non-cloud), but the bug has been in several LR versions and across several OS changes. I have been using LR since v.4, but couldn't say when this first happened. 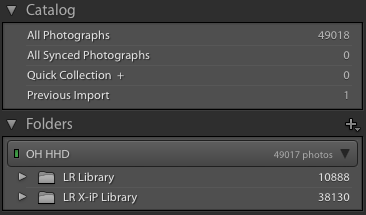